Will Ed Go to Bed With Marcus Evans? 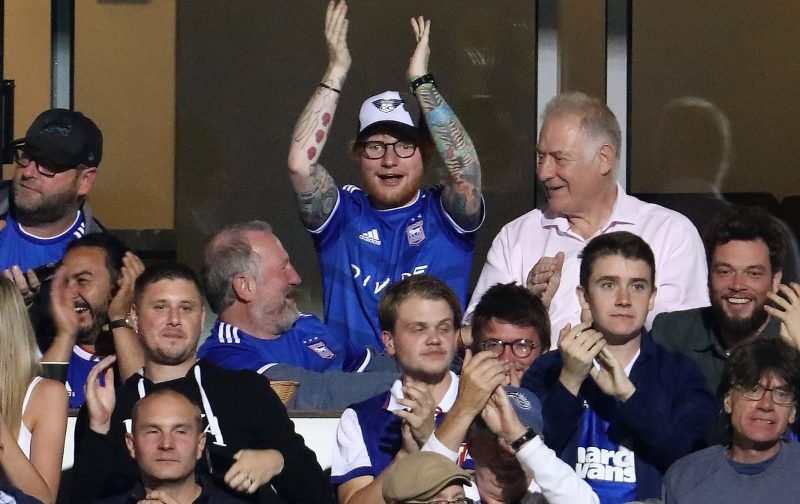 The rumour mill is rife with talk about Ed Sheeran and it is not all music-related. Closer to home, and there is more gossip about Ed having much closer ties to Ipswich Town. Now we all know that he is a regular attendee at Portman Road these days but is there more to this than meets the eye?

An old school chum nicknamed ‘The Professor’  who has stayed in touch since schooling with him in Suffolk has indicated that Ed is not just content to sit in the stands cheering on the Blues, and has been in discussions with owner Marcus Evans with regard to playing much more of a hands-on role in supporting the club he loves. What this entails exactly is not clear. Although he was born in Halifax in West Yorkshire, he moved with his family from Hebden Bridge to Framlingham in Suffolk as a child, and this is where his love affair with Ipswich Town Football Club began.

According to the Sunday Times, Rich List, Sheeran is the 10th highest-earning British musician in the land and is said to be worth at least 2oo million pounds  – thanks to the success of his record-breaking Divide tour which ended last August.  The ‘Shape of You’ singer has been clever with the money he has made so far, investing his fortune in several multi-million-pound properties across the UK, and he is apparently prepared to splash the cash elsewhere.

This is quite untypical of your average successful superstar who is more inclined to live, and indeed, spend for the moment, as we all bore witness to, with the sad demise of Amy Whinehouse.

The Times newspaper added that Sheeran had added £40 million to his total earnings over the past year, which was undoubtedly down to his massive 96-country tour and those bumper album sales! How nice it is to see a famous Ipswich Town supporter showing a serious financial interest in the Blues, and although it is highly unlikely that he would be looking to purchase the club, his interests may extend to some kind of directorship? How could that work I hear you ask?

Well, of course, 56-year-old owner Marcus Evans work revolves around conference calls so he has the perfect tool to ensure that even when Sheeran is on another world tour, he can still be at those crucial board meetings too!

A year or so ago Marcus Evans said that he had received only two ‘credible’ offers to buy the club but they did not meet with his expectations. He said in an exclusive interview with the East Anglian Daily Times in January 2019 that he was now attached to the club like an umbilical cord.   “You can’t help becoming very emotionally tied to a club that you’ve put so much effort into. You’ve put so much emotional energy into trying to make the thing work. The managers find it incredibly hard emotionally when it doesn’t work out. But they can leave. Not the owner. The owner is still here and has to pick up the pieces.”

So then, reading between the lines, it would seem that Ed Sheeran has not got the financial clout or the desire to buy the club and Evans would be loathed to sell. Certainly ‘The professor’ did not suggest as much so we can only assume that his interests may lie somewhere in the boardroom; with perhaps a long term aim to have some sort of controlling interest in the club.

If this was to occur then it would be wonderful news for all Ipswich Town supporters, who have suffered the indignity of watching the celebs of Norwich dominate the media.  Sheeran is not only a great artist but he is also a very charismatic individual, and he has the potential to energise the club in a way not seen since the Cobbold era.

2 Replies to “Will Ed Go to Bed With Marcus Evans?”