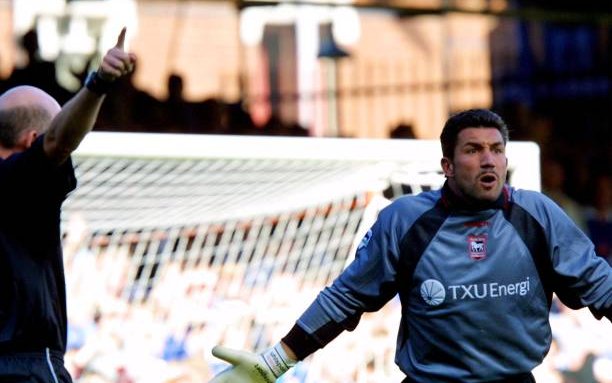 Once again, this study is based entirely on the goalkeepers I have watched over the last 50 plus years and nobody else. I cannot assess players from other eras, but I think you would agree, that half a century of watching Ipswich Town is a fair amount of time.

1. Matteo Sereni: At 6ft 1inch, he certainly looked the part size-wise, but in every other respect, this Italian keeper was a complete nightmare! He was sent off on his debut, and it all went downhill from then on.  Ipswich signed him in 2001 for a record transfer fee of 450,000 and this remains the highest transfer fee paid by the club. It was the year that Town were relegated from the top flight, and Sereni made just 25 starts before being loaned out to Brescia in 2002.  Matteo Sereni was later sentenced in 2009 to three and a half years in jail for sexually abusing minors at a Sardinian villa in the summer of 2009. In July 2017, Sereni’s conviction was annulled on appeal and he has scheduled a new trial in Turin. It looks like he failed on all fronts then…

2. John Hallworth: he began his career at Ipswich Town as a trainee before he was given a full-time professional contract. He only played for the Blues 45 times in the six years at the club and was loaned out to Swindon, Bristol City and Fulham, before he was sold to Oldham Athletic for 75,000 quid.  He was a nervous keeper who never made our defence feel comfortable but he excelled with The Latics when in his first season, he was behind the posts in their successful FA Cup semi-final run, and in the League Cup final, but he never felt entirely at home at Town.

3. Paul Overton: The less said about him the better. He played one game for Town in that 6-1 defeat at Aston Villa, just one week before the 1978 FA Cup final. Sir Bobby described him as the best player of the day, but action speaks louder than words and he never played again before dropping down to non-league football with Histon. I think that thumping at the hands of Villa destroyed his confidence, as he was still a teenager at the time. It is a bit cruel to include him here, but scores on the doors live long in the memory, and I simply cannot forget it!

4. Andy Marshall: He was another Goerge Burley signing, as was Sereni, but he got injured on his debut and was replaced by the Italian. He returned to the team but could not stop us from going down. The trouble with Marshall was that he started his career with those folks across the border, and found it difficult to endear himself to Town supporters. He was also a bit accident-prone and his goalkicking was quite frankly horrendous! Marshall went on to play for Millwall and Coventry and was off-loaded at both clubs, having made a similar amount of appearances.

5. Alec Bugg: He was seen very much as a stand-in keeper to David Best in the 1968-1969 season. The man from Needham Market somehow managed to concede 10 goals in the four games as Best’s understudy, and this included a real ‘mare’ that ended up handing the much-maligned Leeds United an undeserved 3-2 win victory at Portman Road. Enough said I think!

Now then, what do you think? Have I missed someone? Is there a keeper out there that I have overlooked and who deserves a special mention for all the wrong reasons?