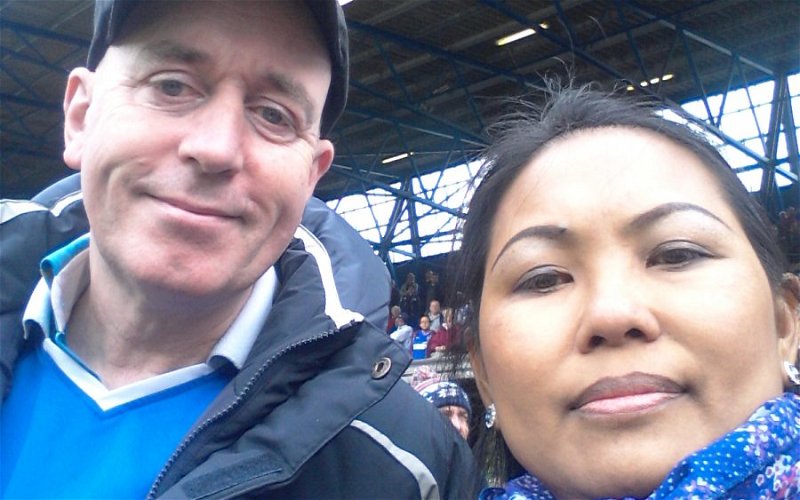 I decided not to write about my top ten favourite players, because I felt it would not do this article justice, as, after over 50 years of supporting Town, there have been so many outstanding players. Please bear in mind that this is an entirely subjective study. If you disagree – or believe that I have neglected someone who deserves a special mention, then please let me know.

20. Allan Hunter: He was bought by Sir Bobby Robson when his position as Town boss was under threat, and he never let the club down.  Strong in the air, and good in the tackle, Hunter was a member of our FA CUP winning team of 1978 and made 280 appearances for the Blues, along with 53 for Northern Ireland.

19. Brian Talbot: He is best remembered perhaps for his bloodied head wound after scoring Town’s first goal in the 1978 FA Cup semi-final against West Brom. The midfielder who was born in Ipswich moved to Arsenal in 1979 for 450,000, but that was not before he raised the trophy with Town at Wembley in 1978!

18. Martijn Reuser: After other former Dutch imports Muhren and Thijssen, he found they were very hard acts to follow, but somehow the Amsterdammer managed it, with some sublime free-kicks and that runaway goal that took Ipswich back to the Premier League in 2000; along with a very impressive fifth-place finish in the 2000–01 season, and a return for the club to UEFA Cup football.

17.  Terry Butcher: Although born in Singapore, Terry was a local lad through and through, and I had the pleasure of watching him make his debut against Everton on the 15th of April 1978. He went on to play for Town 271 times and England on 77 occasions. He was, at 6ft 4 inches, a towering inferno at the back, and deceptively skilful for someone so tall.

16. Paul Cooper: Arguably the most underrated goalkeeper’s ever to wear an Ipswich shirt. He made 446 appearances for the Blues and penalties were his speciality, saving eight out of ten penalties one season, which is the most ever saved by a goalkeeper in the top flight of English football.

15. Trevor Whymark: Being born in Burston in Norfolk might not have endeared him to the locals but he won them over with some exceptional performances, and he was bitterly disappointed not to have made the cup final side but injury thwarted his chances. He made one appearance for England in 1977 and 261 for Ipswich scoring 75 goals. Great forward and very intelligent on the ball.

14. Alan Brazil: Another outstanding forward who I had the pleasure of watching many times. Between the years 1976 and 1983, he played 154 times for Town and netted 70 times. He made 13 appearances for Scotland too, and his dribbling ability and football nous got him lots of goals.

13. George Burley: I loved watching this player in action. In many ways, he was ahead of his time, playing that wing-bak role to such good effect. He joined in 1972 as an apprentice, made his senior debut against Manchester United at Old Trafford at just 17, and was asked to mark George Best! Wonderfully gifted player who went on to successfully manage the club later in his career.

12. Mick Mills: Holds Ipswich Town’s record number of appearances and captained England in the 1982 World Cup. He was a very dependable full-back who could also ply his trade in midfield when required and made a staggering 591 appearances for the Blues, along with 42 for England. He was awarded an MBE in 1984 for his services to the beautiful game.

11. Frans Thijssen: In 1979, he moved to England to sign for the Blues joining former FC Twente teammate Arnold Muhren. Thijssen would mesmerize the opposition with his technical ability, and he helped Ipswich to the Uefa Cup in 1981 with goals in each leg of the competition. He was wonderful to watch and a real football artisan!

10. Arnold Muhren: They came over from the Netherlands together, and they stay together on this list because they worked so well together in midfield. His silky football skills brought him to the attention of Manchester United, but not before he raised the Uefa Cup with Ipswich in 1981.

9. Roger Osborne: Anyone who scores the winning goal at Wembley to lift the FA Cup for Town has to be on this list, and that is exactly what he did!  An unlikely hero perhaps but the Otley born midfielder was outstanding that day, and was, like Paul Cooper, not given the credit he deserved.

8. Colin Viljoen: He spent a total of 12 years at Portman Road, playing 305 games and winning two caps for England, both coming in four days in May 1975. He was an outstanding midfielder with a great eye for goal and was unlucky to miss out at Wembley in 1978 when an injury forced him to miss the final.

7. Eric Gates: The kid from County Durham made his debut for Ipswich as an eighteen-year-old on 27 October 1973 at Portman Road and replaced FA Cup-winning goalscorer, Roger Osborne. Playing normally behind Mariner and Brazil, just off the main two strikers, he was lethal in front of goal. He scored both goals in the 1979 Cup Winners Cup first leg encounter with Barcelona at Portman Road, which Town won 2-1. He was in the 1981 UEFA Cup Final against AZ Alkmaar playing both legs. Diminutive in size but with an excellent eye for goal. He made 295 appearances for the Blues scoring 73 times and received two caps for the national team. Technically he was very good.

6. Macauley Bonne: He was discarded by Town at 14, only to return last season on loan from QPR and score 12 goals in his first 16 games. Sadly, he fell out of favour and it is unlikely that he will return. I loved the player and this was not just because he supported Ipswich and grew up in these parts, but because he gave his all week in and week out and scored some fabulous goals.

5. Wes Burns: Who cannot like this guy? He is so exciting on the ball and constantly makes things happen. He ended the season as our top goalscorer and won a host of other prestigious awards. Like a good wine, he is getting better with time.

4. Russell Osman: He played Doug Clure, one of the prisoner-of-war footballers, in the 1981 film Escape to Victory but there was much more to him than that! Osman partnered with Terry Butcher at the back, in the same way, that Allan Hunter struck up a great defensive partnership with Kevin Beattie. He made 294 appearances for Ipswich and 11 for England too. Great defender.

3. Paul Mariner: What can you say about this man. He was my all-time favourite striker for Town, without a doubt. I loved to watch him play, and some of the goals he scored were top draw! Started his career at hometime non-league club Chorley but was soon being noticed and Town bought him from Plymouth Argyle for a club-record fee of £220,000 in 1976. He made 260 appearances for the Blues scoring 96 times. For England, he played 35 times and scored 13 goals in what was a very distinguished football career. Sad he has left us but the memories live on.

2. John Wark: For a defender who adapted to midfield, this guy knew where the net was! He was an instinctive goal-getter who throughout his career was adding to his deceptive skills, with lots of glorious goals! Although born in Glasgow, Warky has made Ipswich Town his home and had played for the club on three separate occasions. In his three spells at Portman Road, Wark played 509 times for the club scoring 135 times!

1. Kevin Beattie: I think he will always remain my all-time favourite Town footballer. Beattie was immense. Great in the air. great on the floor. Great everywhere, and solid as a rock. I am delighted to see his statue outside Portman Road because he led a troubled life outside of football, but always had a smile on his face, and a word in the ear of anyone who was prepared to listen. He was a very special person and a very special footballer too. We will probably never see the likes of him again.

So that’s my pick of my all-time favourite Town playing that I have seen in action but what about you?  I hear you.  Where are Marcus Stewart, Jamie Clapham, Romeo Zondervan and Kevin Wilson! Now it’s your turn folks and it is not as easy as you think!