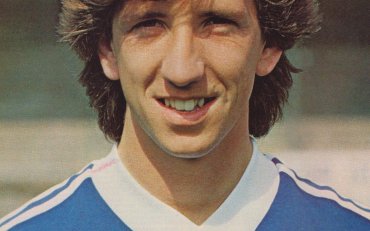 I must emphasise from the outset that this is an entirely subjective exercise. We all have opinions, but few of us are brave enough to share them, so for this reason, I am open to punishment! I will refrain from listing them from one to ten because that in itself is open to controversy. I aim instead only to give credit where credit is due.

PAUL MARINER: I think that most of us would agree that he was a very classy striker, who was as good on the ground as he was in the air, and rarely let a pass go astray. I had the pleasure of watching him many times and he never disappointed me. He became a professional player in 1973 with Plymouth Argyle and scored 56 goals in 135 appearances for them. This brought him to the attention of Sir Bobby Robson who signed him three years later for a fee said to be around 220,00 with John Peddelty and Terry Austin going in the opposite direction as part of the deal. Mariner played 260 times for the Blues, scoring 96 times, and made 35 appearances for the national team. He was a forward of real quality and his exploits will live long in the memory.

ALAN BRAZIL: An obvious choice as he played in the top flight of English football and the Glaswegian started his career with the Blues in 1977 and made his league debut in a league game against Manchester United in 1978. He was even involved in our famous FA Cup journey when he played in the fifth round reply against Bristol Rovers. I remember him scoring twice against Everton at Goodison Park, and should have had a third but he picked up the ball thinking he was offside, and yet no flag was raised! Town triumphed that day 0-4, and Brazil also hit a post! Between 1977 and 1983 Brazil played 154 times for Ipswich and netted an impressive 70 times!

TREVOR WHYMARK: He was one of the most underrated forwards ever to don an Ipswich shirt! I guess being born in Norfolk did not help his cause, but he went on to play for Town 261 times scoring 75 goals, and many of those were recorded during our European adventures. Whymark was a very intelligent footballer, and although he was not a prolific goalscorer, his layoff play was immense, and he was very good in the air. One of the unsung heroes of a bygone football age. After retiring from the professional game, Whymark spent a year as the player-manager with Diss Town.

MARCUS STEWART: Bristol born Stewart was an unassuming sort of fellow until he tied his bootlaces up! Who could ever forget that magnificent goal at Bolton that brought Ipswich back from the dead in the play-off final and how the next season in the Premier League he netted 13 league goals!  A great player with deceptive skills.

JAMES SCOWCROFT: In many respects, you could say there is a similarity between himself and Whymark in that they were always around the team but never an entirely intrinsic part of it. He was born in Bury St. Edmunds and was picked up as an 11-year-old by the Town academy. He was an integral part of the Ipswich squad that won promotion in 2000 but injuries often blighted his chances of cementing his place in the team. He was cool under pressure and effective in the air and went on to play for Leicester and Coventry. he played 206 times for Town and netted on 47 occasions.

ALAN LEE: Described by some supporters as a bit of a donkey Lee was anything but. In the two years, he was at the club he scored 31 goals in 103 appearances and this included a wonderful hat-trick at Portman Road that propelled Jim Magilton’s team up seven places to 11th in the Championship table. Physically strong but mentally stronger still, I loved him when he played for Town and remains one of my all-time favourite strikers.

ALAN ARMSTRONG: Ipswich bought him from Middlesborough for 500,000 quid and what a good buy he turned out to be!  In the three years he was at Ipswich he scored 19 goals in 94 appearances, including that magnificent header in Ipswich’s 1–0 win over Inter Milan in the 2001/2 Uefa cup tie. He also scored from the penalty spot in the return game but Town was well beaten and were knocked out with an aggregate score of 4–2. Another player who did not always get the credit he deserved.

KEVIN WILSON: Much travelled Kevin Wilson joined Ipswich in 1985 and scored an impressive 34 goals in just 98 appearances for the Blues. he was not everybody’s cup of tea but I thought that he applied himself very well and went on to play for Chelsea. Good on the ground but at 5ft 7 inches not so good in the air but his eye for a goal-scoring opportunity was always apparent.

ERIC GATES: Gates made his debut for Ipswich as an 18-year-old in 1973 and went on to appear another 294 times for the Blues scoring 73 goals. I guess Conor Chaplin is the kind of player in the modern game that replicates his style and his position, by playing his most effective football just off the main strikers, who in this case were Mariner and Brazil. Gates’s last game for Town came in a 1–0 defeat to West Ham United at Portman Road in 1985.

DARREN BENT: He made his debut for Town in 2001, and went on to score an impressive 48 goals in just 122 appearances. He was very nifty on the ground and was not afraid to shoot from a distance if the opportunity presented itself. He scored goals wherever he went and played 13 times for the national team as well. His partnership with midfielder Daren Ambrose was hugely effective and the cause of many goals.

DAVID JOHNSON: Born in Kingston Jamaica, Johnson started his career with Manchester United in 1992, but he never played for them as a serious knee injury sidelined him for over a year. On his return, however, he notched up 12 goals in just 22 competitive encounters for their youth team before moving on to Bury in 1995 where he scored 18 goals in 97 appearances. His next port of call was Ipswich Town and this was where his football career really ignited. The Blues paid £1.1 million for the striker and he was worth every penny! In his first season in the Championship, he netted 22 goals in 44 league matches in the 1999-2000 season, and this included his first career hat-trick in a 5–2 win over Oxford United in February 1998. Johnson had speed, technical ability and stamina and he was also pretty good in the air for someone who was only 5ft 6 inches! He played for Town 131 times and scored 55 goals. He was an outstanding footballer who was loved by the fans.

DARYL MURPHY: He scored most of his goals when he was converted to a number nine under Mick McCarthy because that’s where he liked to play as a kid. The Irishman from County Waterford did not hit it off straight away, and it took a couple of loan spells before he finally hit the ground running at Ipswich Town but when he did commit to the club he found his scoring boots ending on the 2014–15   season in the Championship on 27 goals! He was a wonderful forward, who went on to represent his country 32 times. He failed to replicate his goalscoring feats at Ipswich when he moved on and many people argued that the reason Town did not get promoted in 2016 was that Marcus Evans allowed him to leave for Newcastle United.

JONATHAN WALTERS: Town acquired him cheaply from Chester City and he certainly did not disappoint!  Only he only scored a total of 30 goals for Ipswich in 136 appearances he was the kind of forward that defenders hated because of his nuisance presence and his ability in the air. He was the kind of forward that could raise his game against difficult opposition and scored his first-ever hat-trick in the 6–0 win over Bristol City in 2007 at Portman Road. He fell out with Roy Keane in the end here and moved to pastures new but thanks for the memories, Jonathan!

And before you ask, I am only citing players that I have personally watched, and I know that some of you will wonder what happened to Shefki Kuqi, Ray Crawford, Ted Philips, Richard Naylor and the rest, but this is my pick and I am sticking with it!  You are welcome to include yours.