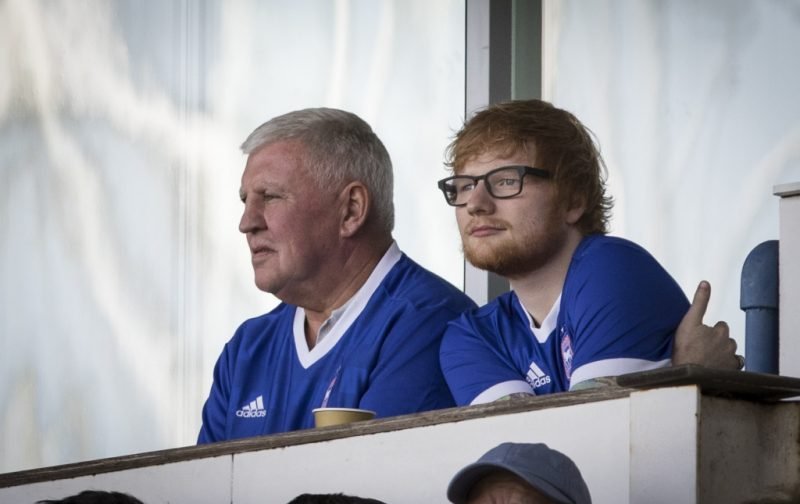 I think I was one of the first people to suggest the Town supporter Ed Sheeran might be interested in getting more involved in the club he loves, and now it looks like I am not the only one!

Al Jeffries, writing on the 72 website, explained today that he believes there could be more to this story than meets the eye.

Guitar strumming songster and often spotted at Ipswich games Ed Sheeran is keen to involve himself in the beautiful game and has already begun provisional talks about buying a stake in the club, along with a more knowledgable football cohort, that is.

Someone who went to school with Sheeran and who was nicknamed “The Professor,” told me some months since that he had heard from his old school chum, and that Sheeran had been in tentative talks with owner Marcus Evans about having a more ” hands-on” interest in the club. Given the present economic climate, I would think that Evans would be keener than ever to accommodate his interests, in whatever form this might happen to take?

What this entails precisely is still a bit hazy but it might involve a directorship of some sort whenever the opportunity presented itself and presumably when a current board member departs. How wonderful it would be to see our Ed up there in the Directors Box, and I am quite certain that his presence would have a positive impact on the field as well. It didn’t do Elton John much harm at Watford and the club blossomed as a result of it.

Now nothing is certain in football but I would suggest that a rumour that does not go away has an element of truth about it and of course, Sheeran has never publicly denied it either.  It seems logical to assume therefore that there must be more than a smidgeon of truth about i,t and you know what they, no matter how carefully you choose your words, they’ll always end up being twisted by others.

Only if, and indeed when, Ed reveals his hand will we truly get to the bottom of this but remember that history is nothing more than a distillation of rumour and rumour is rife at the moment.