Six Of The Very Best 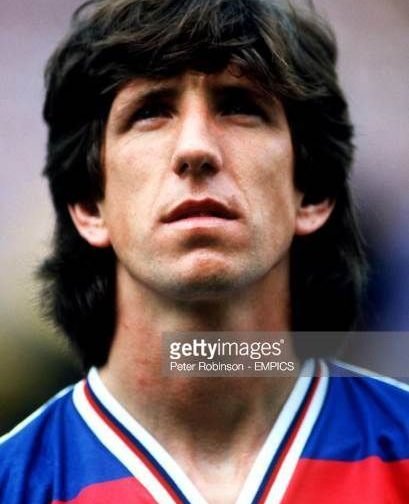 As we commemorate the golden years of Ipswich Town, I thought it might be nice to reflect on some of the great strikers that have worn the shirt over the years. I think it would be unfair, however, to list them in any particular order and all of them are players that I have seen playing in the flesh.

Paul Mariner: He started playing football with Chorley in Lancashire before signing for Plymouth in 1973 and it was not long after that he was being personally tracked by Sir Bobby Robson after he scored 56 goals in 135 appearances for the south coast club. Mariner was bought by Town for 220,000 in 1976 in a player exchange deal that saw John Peddelty and Terry Austin go in the opposite direction. Perhaps best remembered by younger Town fans for his performance against Arsenal in the 1978 FA Cup final triumph, Mariner represented England six months after joining Ipswich and went on to play for his country 35 times, scoring  13 goals in the process. He was as good on the floor as he was in the air and was technically very gifted and his distribution was first class. The Bolton born player went on to play for the Blues 260 times scoring an impressive 96 times.

Trevor Whymark: Perhaps because he was born on the other side of the fence, clever Trevor never really got the credit his performances deserved. he started his career with Diss Town whilst working his office job and was signed by Sir Bobby in 1969. It was not until the beginning of the 1972/1973 season that Robson gave Whymark a chance to establish himself as Rod Belfitt’s striking partner. Injuries had limited his availability before then and when Belftitt was sold in exchange for David Johnson the tide turned for the young striker, who ended the season as joint top score with Brain Hamilton on 11 goals. He scored all four goals for Ipswich against Lazio in the Uefa Cup the following season and  Roma supporters presented him with a trophy for his efforts. This understandably infuriated the home fans in the second left and he left the field with an iron bar in his hand for protection! In total Whymark made 261 appearances for Town scoring 75 times.

Marcus Stewart: Born in Bristol in 1972, he quickly made a name for himself at Bristol Rovers where between 1991 and 1996 he scored 57 goals in 171 appearances before moving to Huddersfield Town. he quickly became a fans favourite there too and their supporters were outraged when the club agreed to sell him to Ipswich at the back end of the 1999/2000 season after he had scored 58 goals for them in just 133 outings. But manager George Burley knew exactly what Stewart would bring to the club and it was his two crucial strikes after Ipswich had been trailing in the first leg of the play-off semis against Bolton Wanderers.  He was in many ways the catalyst for the tractor Boys return to the Premier League and the next season, as Town finished fifth in the top flight of English football he became the Premier League’s second top goalscorer  – and England’s best with 19 goals for the Blues; along with qualification for next season’s Uefa Cup competition. Sadly, the next season, and with European competition distracting from their league campaign Town went down and Stewart could only wade in with six goals and was sold to Sunderland where he stayed for another three seasons. For Ipswich, he notched up just 75 appearances, scoring 27 goals and is probably best remembered for his amazing goal-scoring streak in the Premiership and that wonder goal against Bolton as we clawed our way back.

Pablo Counago: After watching him in action for the Spanish under 21 team against England in Birmingham with George Burley in attendance he signed a four-year deal with the Blues in the late spring of 2001 and quickly made an impression. He was not the tallest of strikers at just 5ft 11 inches but he more than made up for this with his silky skills scoring 31 goals in 100 appearances in his first spell with Ipswich Town which ended in 2005 when he went to join Spanish side Malaga in the La Liga. When they were relegated Town boss Jim Magilton took note and he returned to Town in 2007. After he resigned for the club he said,  I’m excited about the move. As soon as I knew that Jim wanted me I was keen to come back. It’s good to feel wanted. I also know the way Jim likes to play football, pass, pass, pass and that is good for me as well” For the next four years Pablo continued to delight and as Magic stated at the time, he was a player with natural ability and football intelligence. “I have always looked at Pablo as a player with all the attributes to be top class.” He made another 113 appearances for  Town the second time around and scored another 23 goals including that sensational winner in the seventh minute of stoppage time against Coventry City at Portman Road under the stewardship of Roy Keane. Always a fans favourite Counago left town for the second time in June 2011, aged almost 32.

Daryl Murphy: Born in County Waterford, he first came to Town on loan from Sunderland in 2010 making 18 appearances and scoring and scoring 6 goals. He was back with his old boss Roy Keane, who of course formerly managed The Lads. But on the 16th of July 2010 Celtic purchased him for around 1 million pounds and he stayed there for three seasons but made just 19 appearances during his time at Celtic, scoring just 3 goals. Murphy returned to Ipswich on a season-long loan on 25th of August 2011 but scored just 4 goals in the 33 games he turned out for the Blues. On the 30th of August 2012, Murphy signed for Ipswich Town on another season-long loan but once again his goals to games ratio were hardly impressive.  He went on to make 40 appearances in all competitions throughout the 2012–13 season, scoring just 7 goals before he returned to Celtic at the end of the season. Finally, in 2013 Murphy came back to Portman Road once more but this time on a permanent two-year contract and he did not disappoint! Murphy formed a strong partnership with fellow new signing David McGoldrick and the two Irishmen, netting 29 goals between them during the season, with Murphy scoring 13 of them. Murphy was now playing with his favoured number nine on his back and what a difference this seemed to make! In the 2014–15 season he was the Championship’s top scorer with a staggering 27 goals to his name and Ipswich finished 6th and qualified for the play-off’s and on the 15th of July 2015, Murphy signed another two-year contract extension with the club before eventually moving to Newcastle United in the August of 2016 under the Mick McCarthy reign. In his third spell with Town, the very muscular forward with a deft touch scored 50 goals in 127 appearances and represented the Republic of Ireland on 32 times scoring 3 goals for his country.

Darren Bent: Born in Tooting near London in 1984 he played in the Premier League and the football league for nine clubs in total and one of them was Ipswich Town when his career blossomed. Bent progressed through Ipswich town’s youth academy; having joined the club at age 14 in 1998, after considering seriously a career in athletics. Bent signed professional terms for the Blues in July 2001 and scored his first Premier League goal in a 1-0 win over Middlesborough in 2002. Sadly, his appearance in a Town shirt coincided with our relegation from the top flight in 2002 but he continued to score freely for the Blues; along with twin striking partner, Shefki Kuqi, finishing with 16 goals in the 2003/4 season; having scored 18 goals for the club the season before. Bent was always a delight to watch and his pace and intelligence with the ball are why I have chosen him as one of my six stand-out Town strikers at Ipswich. From 2001 to 2005 he made 122 appearances in a Blues shirt and scored 48 goals.

Now I know that a lot of you would wonder why  Ray Crawford and Ted Philips are not included in my list and the answer is simple. I never got to see them play. There will be some contention too about the players that I have not mentioned and these include, the two David Johnson’s, Richard Taylor, Mich dAvray, Shefki Kuqi and countless others but this is purely a personal choice. These are the Town strikers that consistently impressed me most and I would welcome your comments on the subject because we are a broad church of opinions and I am quite sure not everyone will agree.