Time For Some Serious Soul Searching 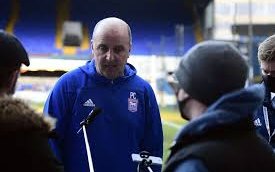 It is time for some soul searching. There are no easy answers, but one thing I do know is that manager Paul Cook and his coaching staff have got to start getting something right and fast!

Cook is only too aware of his precarious position, and the need to turn things around quickly. This is why he is intending to pick a strong team for tomorrow nights under 21 confrontation with West Ham at Portman Road. He cannot afford any more banana skins, and he, and we, desperately need a win!

Normally, this would be one of those games where the result does not matter that much but without a victory of any sort in seven encounters, he understands the importance of this game – not only for the Town players but also for the Blues supporters as well. It is not just about a good performance tomorrow night, but the need to win a football match – whatever form it actually takes.

Former Town captain Mick Mills said after the game on Saturday that what concerned him most was our collective lack of fight. We had it at the start of the season, but now, when we are losing games, we seem to accept our fate. Lee Evans is not a good captain in my view. In fact, I would not even have him in my team, but that is a personal assessment, and I am not the manager.

Mills said that he observed heads dropping and more worryingly perhaps, nobody screaming or shouting for the ball against Bolton after we went behind. Our confidence has hit rock bottom, and so too, is the collective self-belief that was there at the start of the season. We have lost our way and must find a roadmap out of this as soon as possible, starting tomorrow night.

Cook was in a philosophical frame of mind when he addressed team selection for tomorrow. “We haven’t won this season now, it’s a big thing for every club, isn’t it? We need to get a win to get up and running for our supporters. But we have a plan, whether that plan’s a good plan or a bad plan remains to be seen? Obviously, the team’s already been picked and that will be the team for Tuesday. And it’s a very strong team, I might add!”

He is taking a risk, that under normal circumstances he would not want to take, and that is, including first-team players who might pick up knocks before we face Lincoln City away next weekend. Yet, these are not normal circumstances, and he has to sort out his leaky defence before he attacks all the other issues. A win cannot come quick enough for us all, so it must happen tomorrow night.