This Is Relegation Form 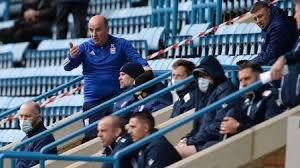 Captain not so fantastic Luke Chambers dropped to the bench again, as manager, Paul Cook made five more changes from the defeat at AFC Wimbledon. Kane Vincent-Young, Mark McGuinness, Andre Dozzell, Teddy Bishop and Keanan Bennetts all came in at the expense of Toto Nsiala and Aaron Drinnan – who were not even included on the bench. Alan Judge has played his last game for Ipswich Town, and of course, Josh Harrop was suspended.

Now onto those stats. Town managed two shots on target today, which is a big improvement on nothing but the goals scored column remains blank. The Blues have now gone an astonishing 439 minutes without a goal, and to make matters even worse, injury-prone James Norwood had to leave the field after 25 minutes with a hamstring tear.

Let us not fool ourselves here. In the eleven games since Cook took charge, we have won two, drawn five and lost four. This is relegation form! In terms of our goals scored, we are ranked 23rd in the League One table, and our last goal was scored, ironically, by Alan Judge after 11 minutes against Bristol Rovers on the 2nd of April! We have eleven points from eleven games.

Town played better than they did against Wimbledon in midweek, but that was not difficult. Cook had said before this encounter that he knew where our weaknesses lay. “If we don’t turn up tomorrow, we will get beat. Simple football. If we can’t raise a fight, and we can’t challenge and we can’t be strong and we can’t create chances and score goals, then we will just fall away to 15th, 16th in the league and that will go down in the history books.” Well, judging by this performance, we certainly seem to be working on it!

Town only real chance came early on in the game. Andre Dozzell took the free-kick, and there James Norwood to head it goalwards. Ben Amos saved initially, and then Keanan Bennetts fired a shot at goal, but Charlton skipper Jason Pearce was in the right place to block it on the line. We had marginally more possession than the home side but, as usual, had no cutting edge.

The bright spot in all of this is that Kane Vincent-Young played a full 90 minutes. We have missed him badly over the last few months, and he seemed to come through this one unscathed. Teddy Bishop looked good – especially in the first half, and Andre Dozzell got the armband but I cannot for the life of me think why? Flynn Downes was in the team and seemed to be the obvious choice.

After the match manager, Paul Cook said that we had made some baby steps. “Today was a glimpse of what we could be about. It was a small step in the right direction.” I am not so sure about that but he is entitled to his opinion.

The Referee was Craig Hicks.

3 Replies to “This Is Relegation Form”