Thank God For That 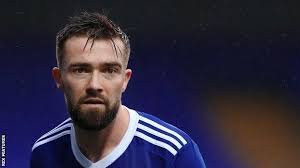 I know some of you will call my comments cruel because not everyone sees things my way. That said, I do have support in some good places which re-enforce my view that this man was not right for Ipswich Town football club. Who am I talking about? None other than winger Gwion Edwards – who I am quite frankly glad to see the back of.

Although Edwards had been offered a new deal by Town boss Paul Cook, he decided that his future lay elsewhere, and thank God for that!  Andy Warren, writing for the East Anglian Daily Times, revealed the news this morning that the winger was on his way to Wigan, and so it was to prove.

I will not shed any crocodile tears here. If we are serious about getting out of this league then we need better quality going forward than he was ever likely to provide. His crossing was generally very poor, and he had more of an eye for the corner flag than the goalposts when he attempted a shot. Yes, he did score a few goals in his time but they were all too infrequent, as was his ability to cross a ball accurately. Benjamin Steed summed him up perfectly when he wrote: Excellent news. Very little end product contribution. Another contributor in the local rag had a similar view on him leaving the club. Jamie PT remarked: Wonderful news. Bang Average.

The 28-year-old made 109 appearances in a Town shirt during his three seasons at the club, and moves on as a free agent. He has signed a two-year deal with the Latics.

I will leave the last few words to another Town supporter who aired his views via the EADT. Tom Lowne said this, Good on the ball but no end product, with the level of targets we are being liked with we can easily find better.  I could not agree more Tom, and I think over the next few weeks, Cook will come to realise not what he has lost but what he has gained!

2 Replies to “Thank God For That”