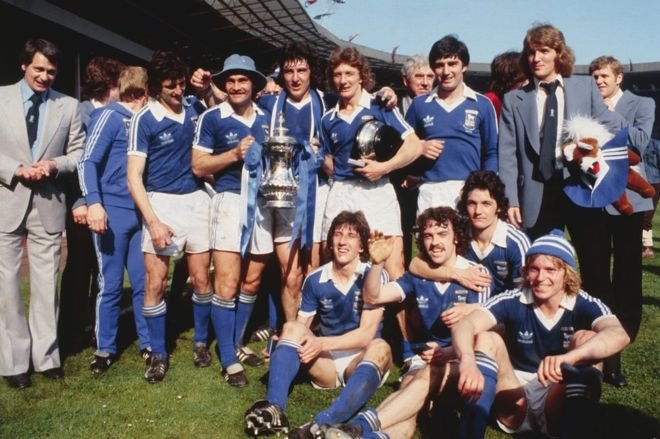 The Those Were The Days website have been asking former players and coaches about their best Town eleven, so I thought it was a perfect opportunity to give you mine! Sadly, although I played a lot of football in my time, it was not at the standard to play in the exalted company of this lot but I have had the pleasure of watching then in action on very many occasions.

Goalkeeper Paul Cooper was arguably the most underrated player in the FA Cup winning Ipswich team because extraordinarily, he never won an England cap after he signed for Town from Birmingham City in June 1974, for a fee of just £23,000! He had a reputation for being the penalty spot king, saving five of the seven penalties he faced in 1978 and then in 1979/80, he saved an incredible eight of out of ten penalties, which was the most ever saved by a goalkeeper in a season! As former Blue Russell Osman alluded to he was a ” great goalkeeper with a very good football brain.” He made 446 appearances for the club.

My favourite right-back would have to be George Burley who made his senior debut against Manchester United at Old Trafford, where he was asked to mark George Best of all people at the ripe old age of 17! He had had pace, aggression and he was a great crosser of the ball and his distribution was outstanding. He made 394 appearances for the club scoring 6 goals. He, of course, went on to manage the Blues and took them up to the Premier League and in 2000–01 when Town finished 5th in the Premier League table he won the Manager of the Season award!

At right-back, it would have to be former captain Mick Mills. He played a key role in those magic years between 1978 and 1981 when he lifted both the FA Cup and Uefa Cup in blue colours. Back in the 1972–73 season, England manager Sir Alf Ramsey gave Mills his international debut in a 1-1 draw with Yugoslavia at Wembley and he went on to make 42 international appearances in total.  For Ipswich, he became more accustomed to a midfield role but as Osman says he was very adaptable, and an intelligent footballer. He made 591 appearances for Town, scoring 22 goals.

In central defence, I would have local lad Terry Butcher who I saw make his Town debut at Goodison Park in a First Division match on 15 April 1978 when he came on as a sub and I remember Everton fans muttering about how huge he was! He was just 19 then and already an imposing figure on the field. In 1981, Butcher was part of the Ipswich side that won the Uefa Cup under Sir Bobby Robson and was capped 77 times for England.  He was dominant in the air and read the game superbly and who can forget his bloodstained bandage that covered a deep cut to his forehead after the crucial World Cup qualifier in Sweden in 1989. He made 271 appearances for Ipswich Town and waded in with 16 goals.

And, my all-time favourite football takes centre stage. Kevin Beattie had it all. Strong in the air. A ferocious tackler and a goalscorer to boot! He was a rag to riches star who was plagued with misfortune both on and off the field. He was such a vital cog in the wheel of the Ipswich team that he sometimes returned to the fray when he was not entirely fit and this cost him dearly as time progressed. It was Sir Bobby Robson who met him at Euston Station after he was left abandoned by Liverpool at Lime Street and The Beat went on to make 228 appearances for the club, scoring 24 goals. Beattie was a class act and if had it not been for injury would have made received many more cap for England than the nine he accrued.

In left midfield, it would have to be Arnold Muhren who had played alongside Johan Cruyff at Ajax and was signed by Sir Bobby for £150,000 after Ipswich had won the FA Cup. He had a wonderful range of passing at his disposal and his silky style complimented a change of playing style for the Blues at that time. He was in the Ipswich team that won the Uefa Cup in 1981 and he was capped by the Netherlands 23 times in 10 years and went on to play for Manchester United. His time at Town saw him play for them 161 times, scoring 21 goals.

And in central midfield, it could only be the irrepressible John Wark who played for the club on three separate occasions. He began his career with Ipswich playing at left-back and then a central defensive role and occasionally occupying the right-back position too.  He signed professional terms for the club on his 17th birthday but was drafted into the team as emergency cover for Kevin Beattie on the 27th March 1975 in the 3–2 FA Cup sixth round win over Leeds United. This was the third reply of this tie and Sir Bobby Robson told him afterwards, “I wouldn’t put you in the team if I didn’t think you were good enough.” Later he moved into midfield in a central defensive role but his eye for a goal made him very useful up and down the park.  Wark was a brilliant reader of the game and was outstanding in the air where he found the net on many occasion too. He went on to play for Liverpool and he continued to be picked for Scotland where he made 29 appearances in the national team colours. Over three spells with the Blues, he made a total of 509 appearances, scoring a very impressive 135 goals!

On the right of midfield, I would have to choose the other Dutch import Frans Thijssen. He added a new dimension to the team and often looked like he had to ball on a piece of string. He had close control in tight areas and good score as well when the opportunity presented itself. Sir Bobby bought him for 200,000 pounds from FC Twente and spent four years at Town. He made 125 appearances and scored 10 goals.

And a player that I would put just behind the main two strikers would be Eric Gates. He made his debut for the Blues as an eighteen-year-old on the 27th of October 1973 at Portman Road; having replaced FA Cup-winning goalscoring hero Roger Osborne! Although he was in the squad, he missed out on the FA Cup final in 1978 but was in the winning team that raised the Uefa Cup in 1981. He was not an out and out striker and according to former Blue Steve McCall “too lazy to be a midfielder,”   but he adapted to the role designated to him by Bobby Ferguson and was a nightmare for defences and won a number of crucial penalties. He played 296 times for Ipswich scoring 73 goals. In the modern era, Alan Judge reminds me of him a little but that’s where the comparison ends.

And Paul Mariner would just have to be my all-time favourite centre forward. In fairness, I never got to see Ray Crawford or ted Philips but from more than 50 years of watching the Blues, this man was the best. He was great in the air and had excellent strength and mobility. He scored 61 goals in 155 for Plymouth Argyle before he came to the attention of Town. Arguably one of the best ever players to don an Ipswich shirt he was called up to play for England under the Robson reign, making 35 appearances and scoring 13 goals. Ipswich bought him for  £220,000 with Jon Peddelty and Terry Austin going the other way. Mariner made his debut in September 1976 and quickly settled into the Ipswich side as an old-fashioned centre forward and went on to play 296 times for the Blues, scoring 96 times in an eight-year spell with the club.

And another player who I had the pleasure of watching on a number of memorable occasions was fellow striker Alan Brazil. I remember once away at Everton he should have claimed his hat-trick but he picked the ball up, assuming he was offside but he wasn’t and then the whistle blew. He got two goals that day and hit the post as well but as the cushions rained down on manager Gordon Lee at Goodison Park, the Tractor Boys returned to Suffolk with all three points after a 0-4 victory! Brazil had a fabulous first touch and was a fantastic finisher but strangely only played for Scotland 13 times and scored just once. For Ipswich however, he regularly found the net scoring 70 times in 154 appearances for the club. These days he hosts a programme on Talk Sport radio.

There are so many near misses that deserve a mention too and they include; Russell Osman, Brian talbot, Chus Kiwomya, Jason Dozzell, Allan Hunter, Trevor Whymark, Herman Hreidderson, Mauricio Taricco, Tony Mowbray, Jamie Clapham, Pablo Counago and Shefki Kugi but at the end of the day this is my own personal choice and you can, of course, agree to differ.