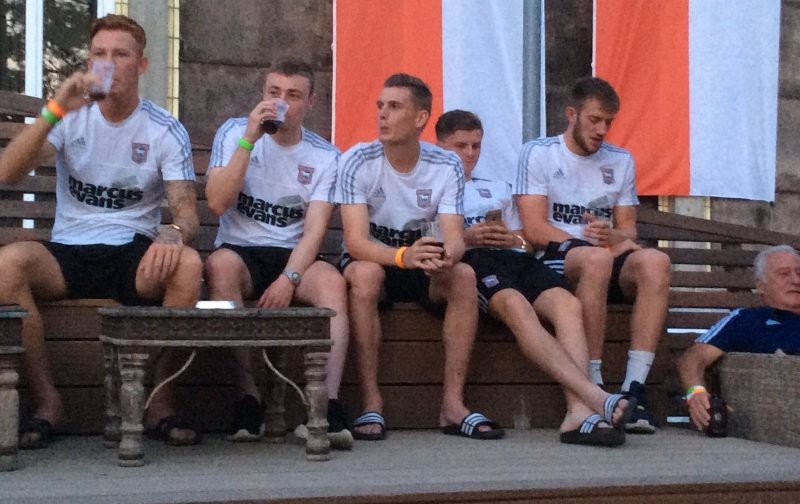 We are becoming spoilt these days on success. Undefeated after ten games and top of the table should satisfy most of us and yet there is more good news! Town manager Paul Lambert reported today that both striker Freddie Sears and midfielder Teddy Bishop are making good progress. “They’re doing great, the two of them,” Lambert explained. He did warn however that it would be a long road back for both players and they will have to be nursed back gently.

The Town boss is encouraged by what he has seen and their first involvement in competitive football could well be with the under 23’s. ” They’ll definitely need some game time in the U23s, that’s normal but the important thing is they’re coming back fit. It’s seven months for Freddie, I think. He’s doing great. Hopefully, he’ll be training in the not too distant future. Bish is doing really well as well. They’re two big players for us who will hopefully contribute before the season is out, Lambert remarked. There is hope that in the case of Teddy Bishop he could be back earlier than anticipated, and the same could be said for Fred.

League One will test our squad to the full during the course of the season, and some of the pitches that we play our football on might not be in keeping with what we have all become accustomed to in the Championship. At the moment we are steering clear of any more long term injuries but it is good to know that these two quality players are getting nearer to the first-team action because, over the course of a season, we will have to shuffle the pack more and more.

Cole Skuse believes that an immediate return to Championship football is a must for Ipswich Town; otherwise, we might find it increasingly difficult to pull free. Nottingham Forest, Leeds United, Sheffield United and more recently Sunderland have failed to escape at the first attempt and as a result, lost some of their more accomplished players. Premier new boys Sheffield United were down here for a staggering six seasons so let that be a warning to us all!

But Everton loanee Luke Garbett is of the view that as long as Ipswich can sustain the high standards they have already set this season, it will be difficult for anyone to catch us! He said in an interview with the club website that he is optimistic for the future.”  Hopefully, we can push on now and really cement ourselves at the top of the league. The squad is in great shape, we’ve got an abundance of players really, so we’re flying. Hopefully, we can continue that at Fleetwood. It will be a tough game, away from home, but we have to attack them, do the things we’re good at and believe we’re going to come out on the right side and get three points. We’ll go into that game fully confident we can do that.”

Come on you Blues!