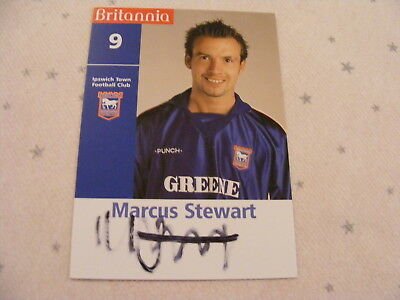 Now before you start to get your knickers in a twist, I am not referring to our former owner Marcus Evans here. Nor am I suggesting that he was not an honest man, but with reference to our previous cheque-writer, he was sometimes rather economical with it, but that is another story entirely.

The Marcus that I am writing about in this column is someone that was adored by fans. If you want the easiest clue of all, he was the striker who turned our play-off semi-final on its head with that wonder goal – which in the end, was perhaps the main reason we made it back into the Premier League, all those years ago. Fabulous goal. Fabulous person.

Marcus Stewart spoke recently with Mike bacon of the East Anglian Daily Times about how not having spectators in stadiums can impact players. “I really do think some players have enjoyed not having the pressure of having fans around them. Those sort of players aren’t going to last long in the game.”

He is spot on. Part of our problem last season was that it felt as if some of our players – perhaps most of our players, did not really care. If you lose a match, you should not be laughing and joking with your opponents, but this occurred far too often for my liking, and I doubt whether this would have occurred with Blues supporters present. It is a sad reflection of the modern game that a football player no longer seems to have a close allegiance to the club he plays for. Too much easy money and complacency are endemic in the industry today, and let’s not forget, it is an industry!

The game has moved on by leaps and bounds in the last 20 years since Stewart played top-flight football. Some of it has been good, in that the technical aspect of the game and the fitness levels required to perform in it has improved. Inflated salaries and inflated egos are the discernible downsides of it all. Sadly, there are too few players who wear their heart on the sleeve anymore.

What I found baffling is that kids who have been here since the ages of seven and eight and who are wearing the first-team shirt really should care. Only Flynn Downes give me that impression, and even he has looked for a transfer. I will leave the last few words to the man himself, Marcus Stewart. “Those that kick on, love that sort of crowd stuff, even when it’s negative. It makes you a stronger person if you get through it. So, yes, I think some have loved having no crowds and some have really missed it. And you’ll find out who those players are when the crowds start to come back.”