Losing Him Is A Huge Blow 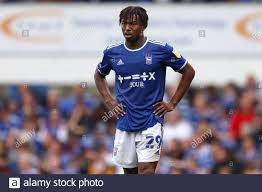 The Town squad had plenty of depth these days, and thank goodness for that, because tomorrow against Bolton at Portman Road, we will be without star man Kyle Edwards.

To make matters even worse, his obvious replacement Bersant Celina does not get international clearance until September 15th.

It begs the question what is it with Town and injuries? Year on year it is the same old story. Every club suffers an injury crisis from time to time, but here it seems to be a recurring theme. Some people seem to think it relates to the intensity of the training programme – or even the training ground, but whatever it is, it cannot be only bad luck.

We may have strength in depth these days, but Cook might already be regretting letting Armando Dobra go to Colchester United on loan because he would be the obvious candidate to replace either Edwards and Celina. Lady luck has deserted us once more, but I was always against him going out on loan in the first place, as I could see this one coming!

So then, what have we got? I would expect to see Christian Walton to make his debut in goal, and George Edmundson partnering Cameron Burgess in central defence. He is finally fit now, so his baptism in a Town shirt should also come tomorrow afternoon.

The most likely replacement upfront is likely to be Conor Chaplin. He’s been out for a few games with a hamstring problem but could start in place of Edwards. We know that Lee Evans will continue as captain for the moment. I just hope that the arrival of Sam Morsey as his eventual successor might spur him on to better things. He has been the biggest disappointment so far; along with perhaps keeper Vaclav HladKy in my book. Our other bright spark Macauley Bonne will be the lone striker.

We all know how badly we need a win tomorrow. We still have a good group of players available but now, perhaps more than ever, they all have to step up to the plate and be victorious!