It’s Time To Look Back And Forward 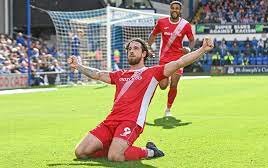 The key to our success next season will probably be built around who we acquire this summer, and top of the priority list is a right-wing back and a couple of new strikers. Domonic Thompson failed the audition, and in the striker’s department, Joe Piggott and, to some extent, Macauley Bonne did cover themselves in glory either.  I would still like to see Bonne return – if only to bolster our attack, but Piggott might well depart.

So then, who should we get? Calum O’Dowda would be my choice, to be honest. He is 27 years of age, that is the same age as Wes Burns, and has been capped by the Republic of Ireland 23 times already. O’Dowda is direct, speedy and skilful and is available on a free. Imagine him and Burns bombing down both flanks!

If we were looking to hire a loan player, then manager Keiran Mckenna might be persuaded to take a punt on Manchester United’s Alvaro Fernandez. He is just 19, but I guess the boss knows enough about him by now to decide whether he is worth bringing in? He is a charismatic player, with an abundance of natural talent and signed for Manchester United on a four-year deal in 2020 from Real Madrid. He also received his first call-up to the Manchester United first team in April 2022, when he was named on the bench for the Premier League game against Chelsea but didn’t enter the fray.

In attack, there are lots of players out there who could do an excellent job for the Blues, but uppermost in my mind at the moment are Cauley Woodrow, (who we believe the Blues are interested in) and Leicester City striker George Hurst, whose contract at the King Power is coming to an end shortly. Woodrow is an ideal age for a striker at 27. He has enough experience to do the business and his season-long loan at Belgian second-tier side OH Leuven will have enhanced his knowledge of the game.

Ryan Hardie at Plymouth is another real possibility. The 25-year-old frontman netted 19 goals for the Pilgrims last season, so he certainly knows where the net is! If we do not get any of the above mentioned forwards, then I think we should Cole Stockton from Morecombe. He knows this league well and last season scored 23 times for The Shrimps, and at 28 is not too old or not too young, and is seen by some as League One’s very own version of Harry Kane! Now, that is a thought worth drooling over!