Is He Really Up To It? 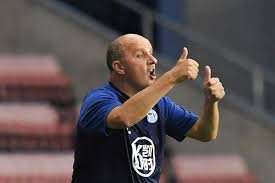 I think you can guess who I am talking about. After twelve games in charge, he has a horrendous track record with just two wins to his name. Eleven points from twelve matches. That’s abysmal, and he knows it. The question is, what can he do about it? He has juggled the pack, again and again, but all to no avail. Different formations. Different players. Same results.

Our new American owners must be wondering what’s going on as well. They may not have expected immediate promotion, but when Cook took over, there was every hope of that, as we were just two points off the playoffs at the time. Things have gone from bad to worse and rapidly. And to add insult to injury, the Blues have now gone a staggering 529 minutes without a goal!

Now we know this is not Paul Cook’s squad of players. We know that he cannot wait to get his hands on some of that American money and start the recruitment programme. We totally get why he is so frustrated. He does not seem able to stop the slide, and this is very concerning. No goals in almost five matches tell us a lot about our lack of a cutting edge. In fairness, we did hit the bar twice last night, when opportunistic moments from Gwion Edwards and Freddy Sears almost got us a goal, but once we were chasing the game, you always felt we would not claw our way back into it.

Paul Cook has inherited the worst squad of players in living memory. And I have been supporting the Blues for more than half a century! This cannot go on like this. Cook is running out of excuses to defend himself, and if he is not careful, he will have the shortest reign as a manager of Ipswich Town in living memory too! Nobody wants that.

I genuinely hope this does not happen, but I am beginning to fear the worst. I think he is missing his right-hand man Leam Richardson. Cook hoped that he would join him here, but instead, Richardson choose to stay with Wigan and battle on. With no cash to burn since they went into administration last season, they have now won their last four games and pulled clear of the relegation zone. It speaks volumes for the resolve of their boss and his players, and we could all learn something from it.

As for Cook, he seems like a man lost to a tsunami of self-doubt. ” That’s 12 games for me now and I’d have expected myself to do a lot better – irrespective of any player who is going on the pitch. So the first level of criticism comes to me and, to my staff.”

There can be no other way after he castigated his own players after another midweek nightmare against Wimbledon last week. He chooses the tactics. He picks the team. The buck stops here.