He Down(e)s Tools And Is Sent Packing 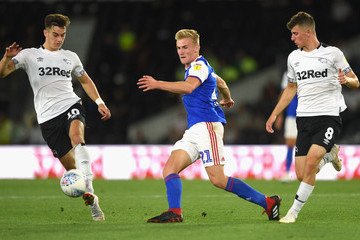 We all know he wants to leave. We all know that the club wants him to stay but a player who is unhappy will not aide team morale so he has been sent packing.

On a much smaller scale, this reminds me a bit of the Lionel Messi situation at Barcelona. Messi wants to leave the Spanish giants but the club doesn’t want him to go anywhere, and I suppose the same can be said for Flynn Downes. Owner Marcus Evans genuinely want him to stay but realises, as we all do, that every player has his price. As things stand, however, the asking price falls far short of what Crystal palace are offering.

Manager Paul Lambert has been forced to make a decision that seemed almost inevitable and he told the Ipswich Town official website the state of play. “Flynn has trained all week but it’s an unsettling time for him at the moment and he’s only a young lad. It’s the first time in his career he is experiencing this situation and it can be difficult, especially at his age. I have spoken to him and told him to have a couple of days off. It will give him time to clear his head and then he’ll be back with us again next week.”

Whether Flynn accepts the situation with time is anyone’s guess. They say time is a great healer but what is to stop Crystal Palace coming up with an improved offer that is closer to the club’s valuation of the player? What then? I think we know the answer. Owner Marcus Evans would reluctantly sell. If the London club wants to make some real mischief they might wait a few days then put in another offer of say 1.8 million and Town would resist once more. How would Downes react if this was to occur? It would surely add to his emotional turmoil.

As with the Lionel Messi saga, there seem to be more questions than answers but manager Paul Lambert is still confident he won’t be going anywhere in this window. “I’d expect Flynn to be with us when the transfer window closes in October – unless someone comes up with an offer that the club has to consider and we are a long way off that at the moment.”

Downes will of course not feature against Bristol Rovers on Saturday at Portman Road, and the next question has to be will his head be right to face Wigan a week later? He has been with the Ipswich for over a decade and the 21-year-old midfielder has been the subject of transfer speculation since January, so you would think he must be getting used to it by now.