Five Of Our Best Ever Dutch Imports 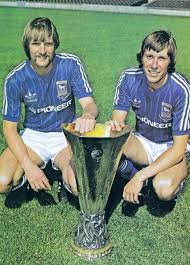 As we twiddle our thumbs and think of what to do next, I thought it might be nice to see what happened to some of the best of our former Dutch Town favourites. I had the pleasure of watching all these players in action many times.  Let’s begin with a Dutch import that did a lot to get us back to the promised football land.

Arnold Muhren: Arnold Johannes Hyacinthus Mühren is a Dutch football manager and former midfielder. His older brother Gerrie, who was also a midfield player, won three European Cup titles with Ajax in the early 1970s. Born in Volendam 1951 he started his career with his local club before moving to Ajax in 1971, where he won 3 domestic trophies and 3 international titles in his first two seasons there. He was then transferred to Twente Enschede after a baron spell with the Dutch club and he won the KNVB Cup with them in 1977.  Sir Bobby Robson was a fond admirer and paid 150,00 pounds in the same year he made his international debut in a 4–0 win against Tunisia. Muhren was an instant hit at Ipswich, and was part of the successful Ipswich team that won the Uefa Cup in 1981, and when Town finished two consecutive seasons as runners up in the First Divison. In 1982 he was transferred to Manchester United and helped them to win the FA Cup in 1983 when he converted a penalty in the replay against Brighton. He went back to Ajax for the remainder of his career and finally retired at the age of 38 having played 23 times for the national team. He now resides back in Volendam where he was born.

Frans Thijssen: Here is another player I had the privilege of seeing on so many times in Ipswich colours. Born on the 23rd of January, 1952 in a place called Malden in Gelderland his professional career began in 1970 with NEC Nijmegen. In 1973 he moved to FC Twente with fellow teammate Arnold Muhren. Thijssen won fourteen caps for Holland between 1975 and 1981 and move to Ipswich in 1979 shortly after Muhren in a deal worth 200,000 pounds. He was also in the side that won the Uefa Cup in ’81 and became the first Dutchman to be voted English Footballer of the Year! He left Ipswich for Nottingham Forest four years after signing but failed to make an impact at the City Ground and left a few months later. After his active football career ended, he managed  Swedish club Malmo for a couple of years but was sacked during the middle of season ’98 with the club close to relegation. In 2014, he became interim manager of Brisbane Roer in Australia before moving back to the Netherlands where he now resided. Like Arnold Muhren however, he is a regular visitor to Portman Road and is still very highly respected in the game.

Martijn Reuser: Reuser began his career at Ajax in the Netherlands, having joined the club at youth level. He was a skilful, high scoring midfielder, who looked capable of gaining a permanent place in the Dutch national team. Then, sadly, he broke his fibula and tibia in a horrendous injury that threatened his career, and on his recovery, he was loaned out to Vitesse Arnhem. He failed, however, to make the impact that they had hoped and returned to Ajax shortly afterwards. Clearly that long term injury made him half the player he was so when Ipswich signed him it must have felt like a breath of fresh air and he quickly began to rekindle his form of old. Having scored a late winner on his début against Fulham, he went on to put the nail in the coffin of Barnsley in the play-off finals at Wembley with a wonderful sold goal. He also established himself as a free-kick specialist at Town and only Luke Garbutt has come close since. When Joe Royle took over as manager he did not fancy Rueser but he had not seen him at his best, as a series of niggly injuries thwarted his career. After short spells back in the Netherlands with Willem II and NAC Breda, he retired and now lives in Amsterdam north. He works as an assistant under 15 trainer for the national squad.

Fabian Wilnis: He was born on 200,000 in January 1999, the 23rd of August 1970 and he is another Dutch import with Surinamese blood. Wlnis played for Nac Breda and De Graafschap before signing for Ipswich in a 200,000 pounds deal in January 1999. Wilnis scored a rare and fabulous goal against Manchester United at Portman Road the season Town got promoted. After not hitting it off with George Burley he got his place back in the side thanks to Joe Royle who had a bit of a soft spot for Wilnis. He was a regular; mainly at right-back but often at left-back, and later at centre-half, during the former England striker’s tenure as manager of the club. He played a total of 282 appearances for Ipswich over a period of ten years and under three bosses. He continues to live in Suffolk and has managed a few of the local clubs. He received a number of death threats in 2004 after he was critical of the Canaries suggesting that they “wouldn’t survive in the Premier League and unless they signed 15 new players they’d be relegated by Christmas.” It looks like it’s a case of Deja Vue then – or is it same old same old?

Romeo Zondervan: Born on the 4th of March 1959 in Paramaribo in Suriname, his early career was with ADo Den Haag and Twente Enschede before he came to England and signed for West Brom. Having made 84 appearances for them, he signed for the Blues in 1984 for £70,000 and went on to make 274 appearances for the club. He then went back to the Netherlands to play with NAC Breda in 1992 and ended his career there is 1995. I enjoyed watching him and he scored a fabulous goal for Ipswich at Goodison Park, many years since, with a fantastic half volley! He went on to scout for George Burley and was responsible for bringing Martijn Reuser to the club and what a purchase that was! Zondervan is a fully qualified pilot but that did not help him when he got arrested by British Customs after they discovered a friend of his was carrying pornographic material from the Netherlands.  He is married with three sons.

2 Replies to “Five Of Our Best Ever Dutch Imports”