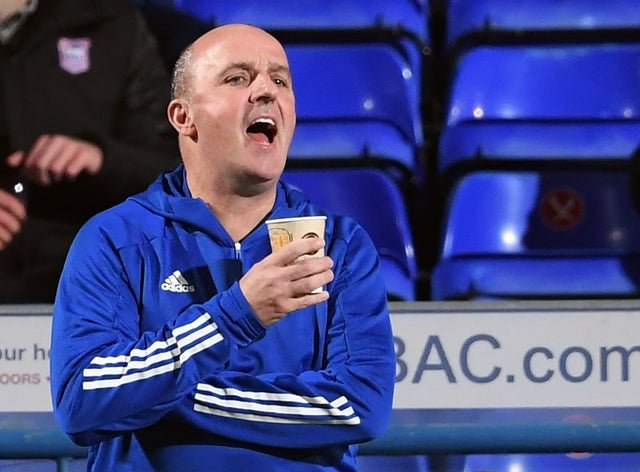 Town manager Paul Cook has told it the way it is. He sees things the way supporters see things, and his honesty and directness is, quite frankly, a breath of fresh air! In his pre-match interview, he did not hold any punches. He castigated the squad for their total ineptness and lack of quality. Cook kicked them all up the proverbial. “We don’t put crosses in the box. We don’t create chances. We don’t defend well. We don’t retain possession of the ball. We are not very fit.  We’re are not very athletic!”

The boss has lost his patience with the eighteen that travelled to Wimbledon and lost so decisively. They have lost his trust. Ten games into his reign and he has only witnessed a steady decline.  Only Arsenal loanee Mark McGuiness and second-string keeper David Cornell played no part in proceedings but were on the bench. They might get a chance tomorrow at Charlton; along with a number of other fringe players. We can expect big changes tomorrow because he knows he has to stop the rot. It cannot go on like this.

Ipswich Town defender Luke Woolfenden was at least honest about his performances this season. The 22-year-old said solemnly, ” “I think I’ve had a completely average season. Coming off last season, I had a very good one and haven’t lived up to the standards of what I set last year. I’ve just been completely average, and that’s not good enough for this club.”

But he is not the only one. The squad as a whole have been way below par and it is the reason we finished mid-table last time around as well. Too many hangers-on, who are more in love with kissing their colourful football boots than they are with kissing the badge.  They suffer from a massive bout of delusions of grandeur but few of them can do what is written on the tin. This squad is full of passengers, who have finally found their true destination, and that should be very far away from Ipswich Town football club!

The defence is poor. The midfield can’t score or create, and the attack could not score in a brothel! The Tractor Boys have now gone 349 minutes without a goal! That stat alone sums up how bad we have been. We rarely have a shot on target, and when we do it is often too weak to trouble the opposition. Our crosses are generally woeful and our timidity going forward is painful to observe.

Known by Flynn Downes as Grandad but to most of us as the ‘headless chicken’ will be the first to depart. He even considered waving the one-year option so that he could continue to play for us but Cook wisely thought otherwise. At 32, he is not getting any younger – or wiser, and it was right to pull the plug. Goalkeeper coach Jimmy Walker has lived up to his surname and gone as well.

This is only the beginning. Cook is privately sick to the back teeth of these under-achievers and he has got nothing back for defending the players for so long. Ten games in, and there is no discernible sign of improvement, and he knows that he will only stay in his job if performances, as well as results, start to improve. He can no longer afford to wrap his players up in cotton wool.

First-team coach Gary Roberts is also frustrated.  Cook explained.  “He’s not very happy. He’s not very pleased. He’s very disappointed with the quality of player we have in the building. I don’t know how long I’ll be Ipswich manager. I don’t know how long the new owners will trust me for? For me to renew players’ contracts and keep people at the club, I’ve got to trust them.  At all my teams historically, I have had 10, 12, 15 players at every club that I trust. I don’t have that at Ipswich Town and I think Gary’s found that really frustrating.”

At long last, we have a manager who tells it how it is. He sees the game as we see the game, and is not afraid of making those difficult decisions. This is what this group of players have needed for a long time and now they can either go with the flow – or simply go!

One Reply to “Cook Roasts His Under-Achievers”