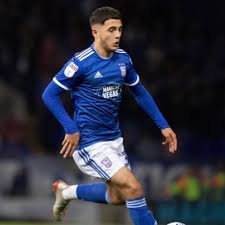 In the modern game, it is unusual to find a forward whose heart is set on playing for Ipswich Town,  especially when other enticing offers are pushed in front of him. In the case of young Armando Dobra, this is exactly what happened and we should applaud his commitment to the Blues when Leeds United, Aston Villa and Southampton were all showing serious interest in the player.

19-year-old Dobra has signed a new three-year deal which could see him stay at Portman Road until at least the summer of 2023 and Town have agreed in the contract he signed last Wednesday, an option to extend the deal by a further 12 months, and his heart is set on making a real impact on the first-team picture and cannot wait for the club to start playing competitive matches again.

We have already seen similar shared loyalties from youngsters Luke Woolfenden and Flynn Downes, and manager Paul Lambert is one of the principal reasons why this is happening. Dobra explained to the East Anglian Daily Times that he is fully focused on the job in hand and wants to add to his eight appearances so far. “I’m really happy to have got things sorted with the new contract and now I just want to focus on the football and showing the manager I deserve to play. That was a big part of my decision because the club gives a lot of chances to their young players and I know that if I train well and perform, then I will get my chance to play.” Woolfenden And Downes are good examples of this. They have both been at the club since they were kids and they have both progressed to play key roles in the current Town team.

Of course, there is no guarantee in the modern game, and in the light of the hardships that Coronavirus has brought upon us, that any of these players will see out their contracts because there is a price on every player’s head. We can only hope that this dedication to the cause is rewarded however and that Blues supporters can watch these players develop as the club develops in due course.

After all, owner Marcus Evans included this objective as part of his much-vaunted five-point plan.